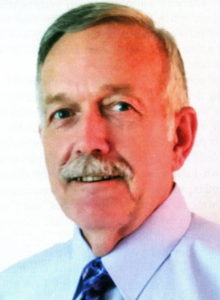 I was born and raised in rural Michigan. My wife Wendy and I were childhood sweethearts and married while in college. After college, graduating with a Certificate in Mortuary Science, we moved to Standish, MI, also small-town America. We raised a daughter and son, who are grown, and have a rambunctious 4 year old grandson. I have been a licensed funeral director for 45 years and owned Arenac Abstract and Title Company for 33 years . I served as Councilman, Mayor, and City Manager for the City of Standish. Additionally I have been a member of Kiwanis International for 33 years and have been active in improving our community by serving on several boards including the Economic and Industrial Development boards, our local hospital, and Arenac Opportunities (an organization whose purpose is to promote the general welfare of the mentally handicapped citizens in our county). In all of these capacities I have been responsible for budgets upward of $2,000,000.

I was active in Boy Scouts as a Youth and as an adult, for 14 years, serving as a Den Leader and Assistant Scoutmaster. My wife and I started a coed Venture Crew – BSA where we served as Leader (assistant leader) for several years. Scouting has allowed me to establish excellent rapport with the youth, something I would continue to work on if I have the honor of serving on the MARC Board of Directors.

In 1976 I met a retired oil field worker and his wife. We established a long friendship of 16 years. It was through him that I acquired my 1929 Model A Fordor. Our friendship led him to ask if I would serve as executor of his estate when it was needed. Of course I agreed, but stated that I would not accept payment for the service. A few months later the gentleman took me to the Secretary of State’s Office and added my name to the title of his beloved Fordor because he knew I would provide loving care and not turn the Model A into a hotrod. It was his way of paying me for my services. After the gentleman passed, the car became mine. A few years later, the Fordor became severely damaged in a hail storm. I totally dismantled the car, scrupulously labeling all parts down to the nuts and bolts. Then, unfortunately “life” set in and the Fordor sat idle for 17 years until I was able to do a total driver frame-off restoration over a two year time period. I managed to restore it just in time for its first outing to be driving my office secretary and her new husband to their wedding reception .

I have been a MARC member since 1992, first as a member of the AuSable A’s in Northern Michigan, and currently with the Script A’s in the Greater Flint area since 20 I 5. I am also a Life Member of MAFFI. We really enjoy the wide variety of activities of our club and have met many wonderful people who are so willing to share experiences and knowledge of the “A.” We love mingling with people from the across the nation who have the same passion for keeping cars original. Recently we became friends with a lovely couple from Australia, who attended the most recent National convention. My wife and I attended the Ground Breaking and Grand Opening of the Model A Museum in Gilmore plus three additional Model A Days. Over the years I have attended nine Michigan Model A Roundup’s and seven Membership Meets. In 2016 , our Script A’s hosted the membership meet and my wife and I are involved in many activities. We attended the 2018 National Meet in Branson where T had the privilege of serving as a Touring Class Judge, giving me the inspiration to tune up my restoration. I entered my 29 Fordor for judging in the Touring Class at the 2019 National Meet in Dearborn. I received the Award of Excellence, 500 points.

My love for cars and restoration led me to sponsor a Car and Bike Show in Standish in 1986, hosting 150+ vehicles on show day. After 25 years of running that car show, my wife and I decided we wanted to focus on the older cars that were kept as original as possible. We started one of the first shows in Michigan that focuses solely on Model A and T’s and other historic cars 1931 and older. We have held eight annual shows which are held at the Standish Historical Depot and Welcome Center, working with Hagerty Insurance Agency, establishing a Youth Judging program for our show.

I have been Chairman of the Arenac Heritage Route Authority, the organization that owns the Standish Historical Depot, a 50 I (c)(3) since 2002. The inter-local governmental authority focuses on the restoration and preservation of the Depot which was built by local farmers and merchants in 1889. During each of the last 8 years , we have kept the history alive by attracting people from all over the state to see these vintage cars at a perfect setting like the Standish Historical Depot and Welcome Center.

I look forward to serving the MARC Board and its membership. The success of all organizations comes from the grassroots level, the Reg ions. Without the work of all the Regions , MARC would not be where it is today. Since we are all getting a bit older, I will strive to pique the interest of the youth in belonging to this wonderful hobby, keeping the ” A” alive for generations to come. This can be done through various programs and events, including the Youth Judging Program sponsored by Hagerty Insurance. It may also be possible for the Regions to work with their local Intermediate School Districts (ISDs) to adopt Vintage Car Restoration as part of their automotive curricula.