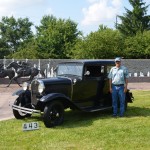 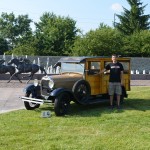 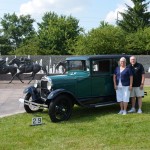 “Look at the Fine Points”

Almost from the inception of the Model A Restorer’s Club, the evaluation of the Model A has been a consistent theme. Beginning with the first National Meet held in Dearborn, Michigan in 1955 a 1931 Roadster owned by Russell J. Gerrits, Chicago, Illinois received the first place award. The initial judging criteria used for this meet consisted of approximately forty-five items for which a maximum number of points could be deducted. An example of one item of consideration was Lower Water Pipe, must be black – 2 Points.

Since that time the Judging Standards Committee (JSC) was formed and over the years one of the top priorities was the publication of judging standards to encourage the restoration and preservation of the Model A Ford by providing the membership with a continuing body of research and reference information which represented the most authenticated data available at that time. The scope of the Judging Standards also evolved to a twenty-four page version used in the early 1970’s addressing 27 areas.

In 1974, the Judging Standards Committee of the Model A Ford Club of America and the Model A Restorers Club worked together jointly and published the Model “A” Ford Judging Standards, a twenty-six page publication addressing twenty-six areas. Since that time, both National Clubs JSC’s have worked together and the initial joint effort was followed by an expanded version in 1981 and at this time the number of areas to be addressed was reduced to twenty-four.

Over the years, many Model A enthusiasts have spent countless hours researching and authenticating information about the Model A Ford in order to provide the casual enthusiast, individuals interested in touring or those members who wish to restore a Model A Ford to the appearance of the typical 1928-1931 Ford as it was driven off the assembly line, except for authentic Ford accessories and safety items.

The JSC consists of twenty members from throughout the Model A world plus former JSC members who have elected Senior Status.

The Committee consists of a Chairman, Vice Chairman, Secretary and five different sections which have responsibilities for areas which the JSC has jurisdiction for:

Research Section – The purpose of this Section is to provide accurate and up-to date information for the authentic restoration and judging of Model A’s by researching information regarding production parts and assembly utilizing the Ford Motor Company archives and other available sources.

Judging Section – This Section is responsible for providing a Chief Judge for each National Meet for Fine Point Judging and coordinating all of the tasks associated with the judging process.

Credentials Section – This Section is charged with keeping and organizing records about members judging experience and seminar participation, checks qualifications for individuals applying for membership on the JSC and confirms qualifications for JSC members requesting Senior Status.

Grievance Section – This Section’s responsibility is to investigate and answer all reported grievances in connection with matters which pertain to JSC responsibilities.

One of the important projects your Committee has been continuously involved with over the years has been the Model A Restoration Guidelines and Judging Standards. If you do not own this publication, check out the inside front cover of the Model A News and order one.

Finally, The JSC meets three times annually at the Membership Meet, National Meet and a weekend meeting in the Fall of each year.

By getting involved with the Judging process, a member will quickly learn more about the Model A Ford and will have an opportunity to judge some of the best examples of both restored and unrestored vehicles.

The initial step is to obtain a copy of the Model A Restoration Guidelines and Judging Standards and refer to the Judging the Model A section which contains the requirements for the various judge classifications. The second step is to volunteer to judge when you register for the National Meet. You will then become a part of the Judging process and you will be glad you got involved!

As an opening occurs on the JSC, the Chairman will publish in the Committee Report in the Model A News, an invitation for those interested members to advise the Chairman of their interest in writing and to provide a resume of their experience. These will be evaluated by the JSC and members will be so advised. Consideration of new members will include the following qualifications.

Fine Point Judging Sheets – The JSC spent many hours developing judging sheets of the twenty-three areas in the present Model A Restoration Guidelines and Judging Standards (“Standards”) in order to more consistently and fairly judge the Model A Ford in Fine Point Judging. These have proved to be value in the judging process and with refinements in the future should be even more helpful.