Do you know that there is financial assistance available to youngsters between the ages of 12 and less than 22 who are restoring a Model A Ford?

The Model A Youth Restoration Award (MAYRA) program has been giving such assistance biennially since 1994. Its goal is to help educate youth through their restoration process and support the Model A hobby by helping financially with the restoration. Our purpose is to solidify the idea of the Model A hobby in our youth’s minds at an impressionable age with the intent and hope that this will be a lasting association that will help support the Model A restoration and the hobby in general into future generations. MAYRA’s help is given in the form of gift certificates mostly purchased from various Model A parts and services vendors. Since 1994, there have been 93 awards totaling more than $124,000. The award given biennially is the number of applicants divided into the available funds with a maximum of $2,500.

MAYRA is funded primarily by local Regions and Chapters of MARC and MAFCA. The national MARC and MAFCA organizations also donate to the fund, as do many of the Model A Ford parts and services vendors. We receive donations in varying amounts from Regions and Chapters, and individuals, often as memorials to deceased members. We are a 501 (c) 3 entity. Please send donations to our treasurer, Jim Lank, 13478 Egbert Street, Sylmar, CA 91342.

The next awards will be announced at both the MARC National Meet and the MAFCA National Convention in June 2022. Applications must be received by May 31st, 2022.

For and application and complete information on the Model A Youth Restoration Award program, go to our website: ModelARestorationAward.org

The Model A Youth Restoration Award (MAYRA) is pleased to announce the recipients for 2020, our thirteenth biennial awards.   Initially, we planned to make this announcement at the MAFCA and MARC now canceled summer events.  However, restorations must continue, and we move forward with our awards. Because of the support from our sponsors and taking into account the increasing cost of Model A parts and supplies, MAYRA’s Board increased the value of gift certificates for each recipient to $2,500

We are excited that we have generous support from MAFCA and MARC, Model A clubs, parts vendors, and other suppliers to the hobby.   We grew from six to eleven parts vendors.  Another very welcome surprise is that Jim Grundy of Grundy Insurance stepped forward to provide the first year of automobile insurance for each of our USA recipients.  When their restoration is complete and the car registered in the recipient’s name, Grundy Insurance will provide the coverage—a very generous way to support youth and the Model A hobby.

We are most proud of the statistic that the number of recipients increased from nine in 2018 to twelve in 2020. Seven are new to the program, including one girl.  Hopefully, it is a good indicator for the future of the hobby. 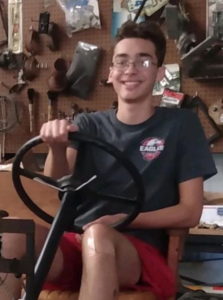 Matthew Goodwin, 18, lives in Prairieville, Louisiana.  He is an active member of the Red Stick Model A Club, restoring a 1930 Pickup named “Henry” in honor of Henry, the car’s former owner and, of course, Henry Ford.  Matthew was a 2018 recipient, and the funds from this award should get the truck completed. Matthew’s brother Conner has been helping him with the project, and they expect to have the truck on the road soon. Matthew says that Conner has been bitten by the Model A bug. 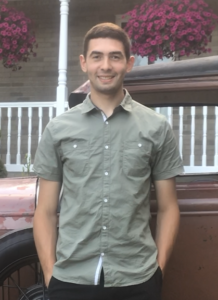 David Sheehan Jr, 21, lives in Southwick, Massachusetts, and a Connecticut Valley Working A’s member.  He received a MAYRA award in 2018 for his restoration on a Tudor Sedan, which he now drives regularly. In March of this year, his grandfather gave him a 1930 Sedan, also needing restoration. Now he is focused on the sedan. He says, “with the help of this award (2020), I hope to complete the Fordor and finally have the reliable touring car I have strived for”. 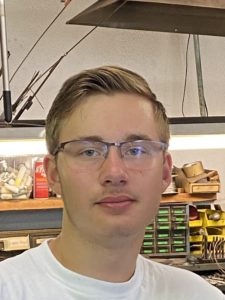 Diezel Cook, 16, lives in Sylvania, Ohio, and is a Sweet 16 A’s member. A recipient in 2018, Diezel is nearing completion of a ground-up restoration of a 1929 Pickup. Recently he submitted a picture of the newly painted body just sitting on the frame. Diezel will have his truck completed soon. Diezel’s Grandpa taught him to drive the Model A at the local cemetery – no one there for him to worry about hurting. 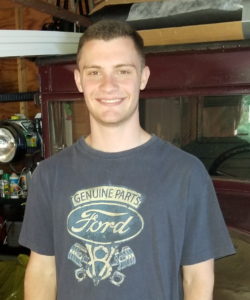 Luke Richards, 21, lives in Medway, Massachusetts, and is a Blackstone Valley Model A Ford Club member. Like most of the other 2018 recipients, he used every penny of the $2200 in gift certificates in getting his 1929 Pickup car to its current condition. Luke says that “the most important thing I learned about myself is that I can work on a Model A and actually fix things.” He hopes to have it completed by the summer of 2021. 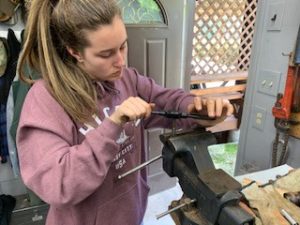 Brooke Lindsay, 19, lives in Vancouver, Washington, and is a Sis-Q-A member in Yreka, CA.  She is restoring her grandfather’s 1928 Pickup. A recipient in 2018, she began her project working with her grandfather. After his recent death, the car was moved to her home where she and her dad work on it.  When asked what she learned about herself doing the restoration work, she said, “I can do anything I put my mind to” and “I can do anything a boy can do.” She hopes to have her Model A finished within a year. 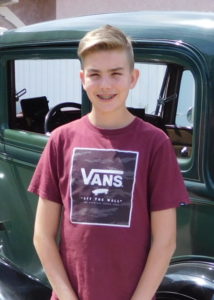 Benjamin Stone, 14, lives in Huntington Beach, California, and is the youngest member of the Santa Anita A’s. Benjamin is restoring a 1930 Tudor Sedan with the help of his grandfather, Tom Endy.  They began the project in March 2020 and have made fantastic progress, thanks to Covid-19, which closed his school.  He and his grandfather have disassembled and rebuilt almost every part of the chassis. No doubt, Benjamin will have the car completed within the year. He says, “I am hoping that by doing this project with my friends and family, I will connect more with them and have even more interest in the Model A hobby, and driving a piece of history myself.” 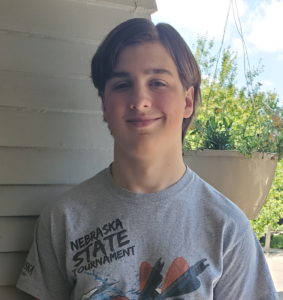 Ryan Spieker, 15, lives in Lincoln, Nebraska, and is restoring a 1931 Tudor Sedan.  He is the youngest member of the Rocky Mountain A’s in Franktown, CO, where his grandfather is president.  The project is an opportunity to work with Dillon, his older brother, and learn from their grandfather, experienced in restoring Model A’s. The pictures he submitted attest that his Model A is an authentic barn find. He says, “We are excited to learn from and talk with experienced Model A owners from all over to keep the legacy and Grandpa’s love of the Model A alive.” 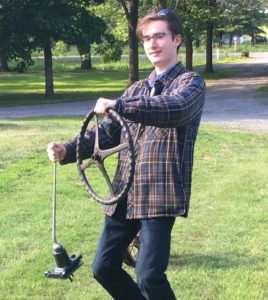 Clay MacWhirter, 21, lives in Venkleek Hill, Ontario, Canada.  He is a member of Canada’s Capital A’s.  He is restoring a 1929 chassis and has not yet decided on the body. Clay has just completed his third year as a mechanical engineering student at Carleton University in Ottawa. He says, “This summer I plan to have the chassis complete and running, leaving me three years to find a body and optimize everything for trustworthy long-distance travel.” 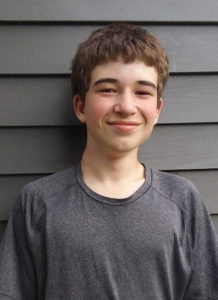 Adam Breer, 15, lives in Castleton, New York, and is a member of the Adirondack A’s.  He is restoring his grandfathers’ 1930 Coupe.  For many years, the Adirondack A’s have operated an educational program giving hands-on experience in restoring a Model A. The program has completed the restoration of several Model A’s, which have gone on to new owners. Adam will undoubtedly have all the help he needs in working on his Model A. 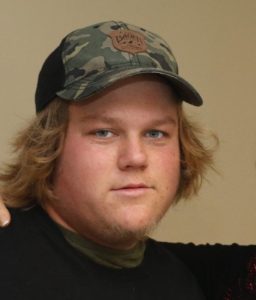 McKay Lank, 19, lives in Canyon Country, California, and a member of the San Fernando Model A Club along with his grandfather.   He started with a 1930 chassis donated by a fellow club member and recently acquired a Fordor Sedan body.  Like a barn find, it is a total ground-up restoration. He hopes to have it completed by the time he is 21. 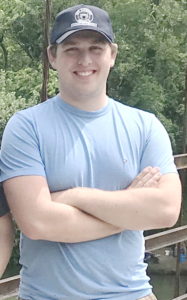 Joshua Schubert, 20, lives in Russellville, Missouri, and a member of the Mid-Missouri Region. Joshua is restoring a 1931 Pickup.  His first recollection of a Model A was a sedan that sat in front of his great-grandfather’s 130-year-old barn. He began looking for a project car after his senior year of high school and settled on a Model A.  He started the project with a rolling chassis. 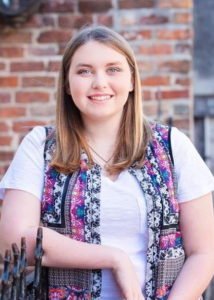 Madeleine DeFraites, 14, lives in Chalmette, Louisiana, and through her father, is associated with the New Orleans A’s. Madeleine is working to restore her grandfather’s 1930 Roadster. He was a long-time member of the New Orleans A’s. While he had restored the car many years ago, Hurricane Katrina took its toll, and the car sat for 15 years.  Madeleine hopes to complete the work by next summer.

These youth and others like them represent the future of the hobby.  MAYRA will make awards again in 2022 but needs each Regions to help find and work with youth who are restoring their Model A’s, It’s good for your Region, and  good for the hobby.

Amy Rozny, Youth Coordinator had the honor of announcing the recipients of the 2018 Model A Youth Restoration Award (MAYRA) at the National Meet in Branson. Many of the Regions that made the award possible were present to hear who received an award and the type of Model A being restored.

The guiding philosophy of MAYRA is that the future of the hobby rests with instilling an interest and love for the Model A in youth.  Once that interest takes hold, the youth is more likely to stick with the hobby or rekindle the interest in the hobby at a later point in life. And being successful in the restoration often depends on finances and that is MAYRA helps.

Twenty-three years ago, the Model A Youth Restoration Award made its first award of $500 to a young member of the Dallas Model A Ford Club.  This year at the MAFCA National Convention, MAYRA made its 81st award to a youth who is restoring her Model A.  Nine recipients each received $2,200 in financial assistance.  MAYRA was able to make these awards through the generosity of nearly 88 Model A clubs of both MAFCA and MARC, six Model A parts vendors, the Boards of Directors of both MAFCA and MARC, individuals and memorials.

Diezel J. Cook is 14 and lives in Temperance, Michigan. He is the grandson of Linda Cook. He restoration project is converting a speedster to a Pickup Truck. He is associated with many clubs including Arizona A’s, Western Lake Erie, Downriver A’s and Sweet 16 A’s.

Michael Callander is 21 and lives in Calgary, Alberta Canada. He is restoring a 1928 Roadster Pickup.  Michael received his first award from this program when he was 12. He is a member of the Stampede City Model A Ford Club.
Matthew Goodwin is 16 and lives in Prairieville, Louisiana and is a member of the Redstick Model A Ford Club. He is restoring at 1930 Pickup Truck.

Luke Richards is 17 and lives in Medway, Massachusetts. He is a member of the Blackstone Valley Model A Club and is restoring a 1929 Pickup Truck

Brooke Lindsay is 14 years old and lives in Vancouver, Washington. She is restoring a 1929 Pickup Truck and is a member of the Volcano A’s, Rogue Valley Model A Club and through her grandfather, associated with the Sis-Q-A’s.

Garrett Haslett is 19 years old, lives in Oxford, Maine and is restoring a 1929 Pickup Truck. He is a member of the Pine Tree Chapter.

Cameron Cox is 18 years old, an excellent mechanic who lives in Porterville, California and is restoring a 1930 roadster. He ismemberof the Happy Honkers and is associated through his grandfather with the Capitol A’s.

Chandler and Colby Etheredge are two brothers who live in Ft. Worth, TX and are about to select a body style, either Roadster or Pickup Truck, for the Model A frame, engineandtransmission that they possess. Chandler is 17 and Colby is 15. They are members of the Ft. Worth Model A Club

David Sheehan Jr. is 18 years old, lives in Southwick, Massachusetts and is a member of the Connecticut Valley Working A’s. He is restoring a 1930 Tudor.

There were four recipients, each receiving $2,200 in financial support. Congratulations to them.

In 2014, nine recipients each received $2,000 of financial support. Congratulations to them.