A Maintenance and Operations overview and primer. 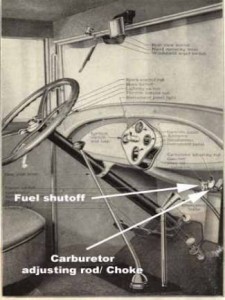 BASIC AREAS OF YOUR CAR:

Starting the New Ford Model A

I have my first model a, now what? How do I get it going and work on it?

I am sure you want to get in and drive, first let’s learn how the to start this car. There are many, many opinions on how to start a model a, yes it is true that you have to learn “your” car and how it works but let’s talk about the simple common way.

The following is a direct quote from the Model A instruction manual that was provided with every new model a. Please note: your car may be totally different when starting and running, this is the basic method that ford outlined in the manual. It is interesting that it mentions nothing about turning on the gas at the valve under the dash. Obviously, this has to be one of the first steps. By the way on the original valves, the handle in the vertical position is ‘on’. Check the oil and water (gas too) prior to starting. In my opinion, when starting a cold engine, don’t choke the engine for more than a couple revolutions. If held open as described below, you run the risk of flooding the engine. Also, the ignition switch described below is the original style ‘pop-out’ switch. When opening the carburetor-adjusting valve, lightly seat or close the valve by turning clockwise until it stops, then open one full turn.

This applies to a model a that has been run recently. If the engine has not run in a long time, don’t start it until you are sure it is ready to start and has been checked.

Before starting the engine

Be sure the gearshift lever is in neutral position, ie: the position in, which it can be moved freely from side to side. Advance the throttle lever located under the steering wheel (right hand side) about three notches, or until the accelerator pedal moves slightly downward. Pulling down the throttle lever or pressing on the accelerator pedal, controls the quantity of gas entering the cylinders, and regulates the speed of the engine. Place the spark lever (left hand) at the top of the quadrant (the notched quarter-circle on which the lever is operated). This is the retard position. The spark lever regulates the timing of the spark, which explodes the gas in the cylinders. Always retard the spark lever when starting your car. Starting the engine with the spark advanced may cause the engine to kick back, and damage the starter parts. After the engine is started, advance the spark lever about half way down the quadrant.

The ford type electro-lock used in the ignition switch is a combination switch and theft proof lock affording full protection for the car and meeting the exacting requirements of the underwriters as regards theft insurance. To unlock the electro-lock, simply insert the switch key into the ignition switch and turn the key to the right. This releases the cylinder of the lock, which snaps forward and closes the ignition circuit. When the cylinder is released the engine can be started in the usual manner, and the switch key withdrawn from the lock. To shut off the engine, push in on the cylinder of the lock until it snaps back in the lock position. Be sure that it stays in. This shuts off the ignition and locks the car.

When starting a warm engine, do not pull back the choke unless the engine fails to start on the normal mixture as there is a possibility of flooding the engine with an over rich mixture of gas. If you should by accident flood the engine, open the throttle and with the choke rod in normal position, turn the engine over a few times to exhaust the rich gas.

We suggest you now read through our Model A Primer.