Someday we will all be going for a ride on the BUS! 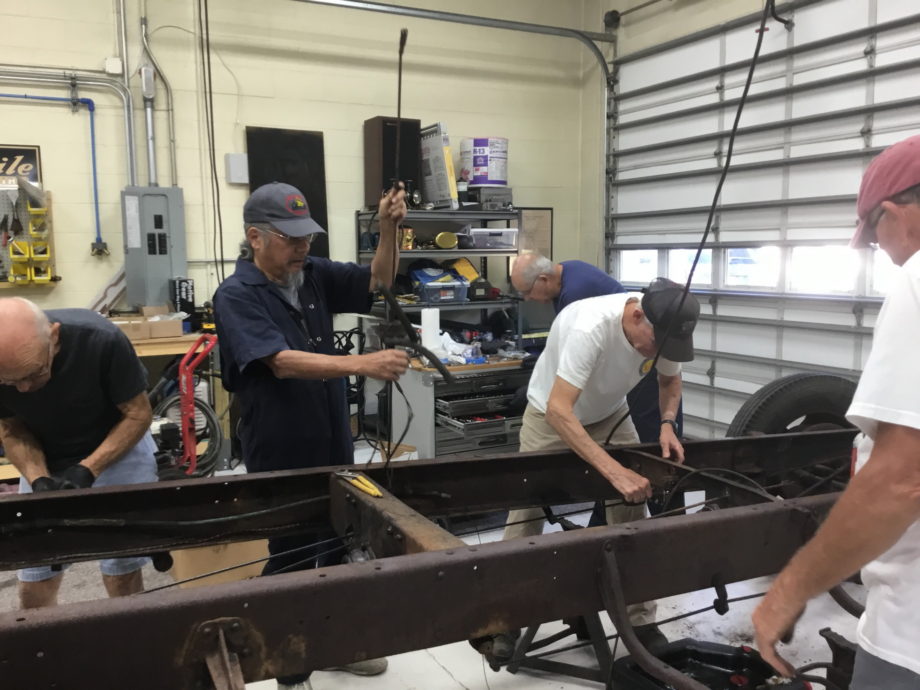 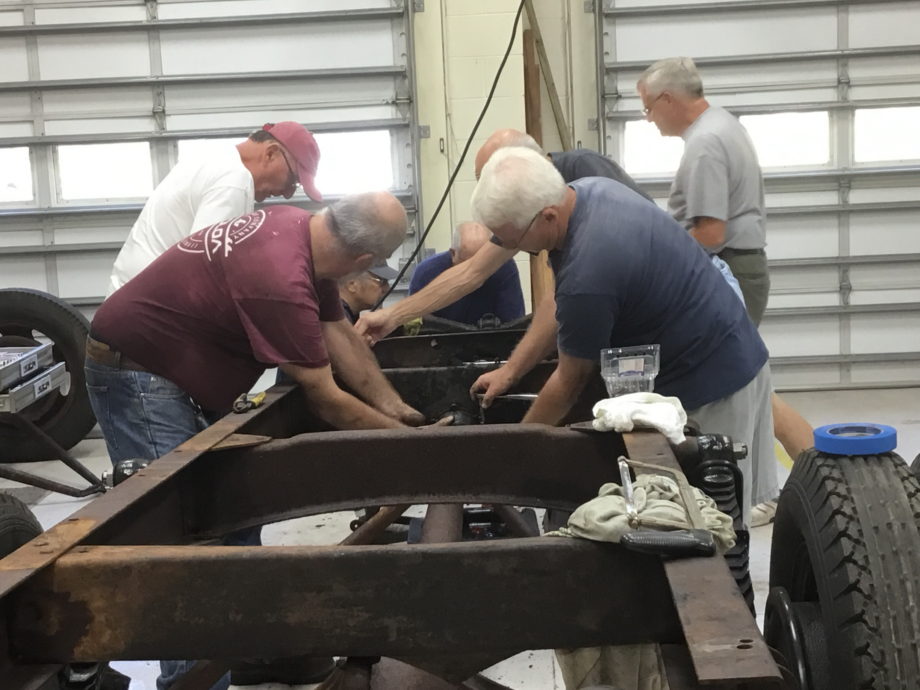 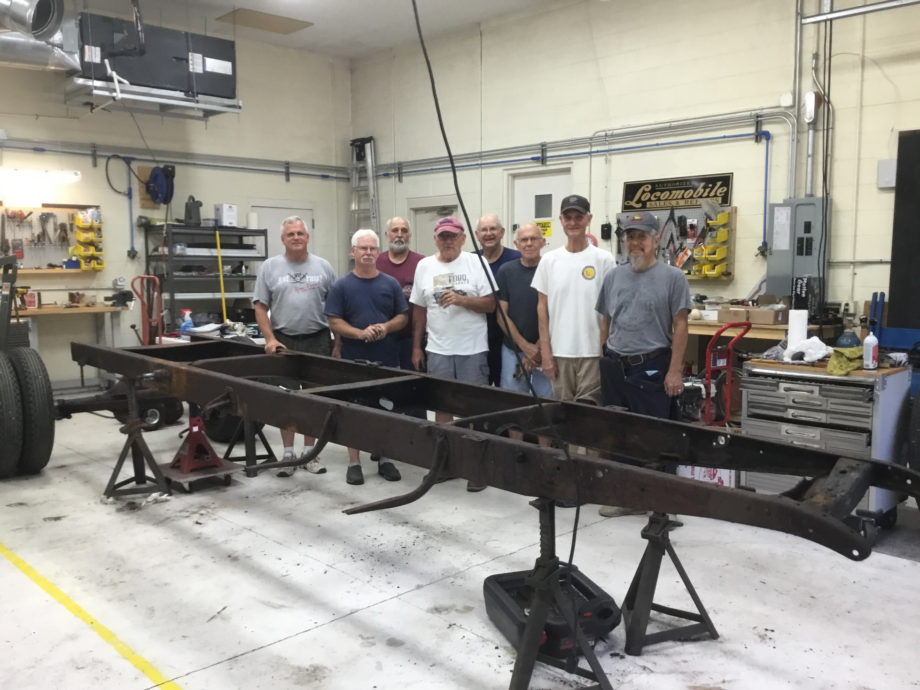 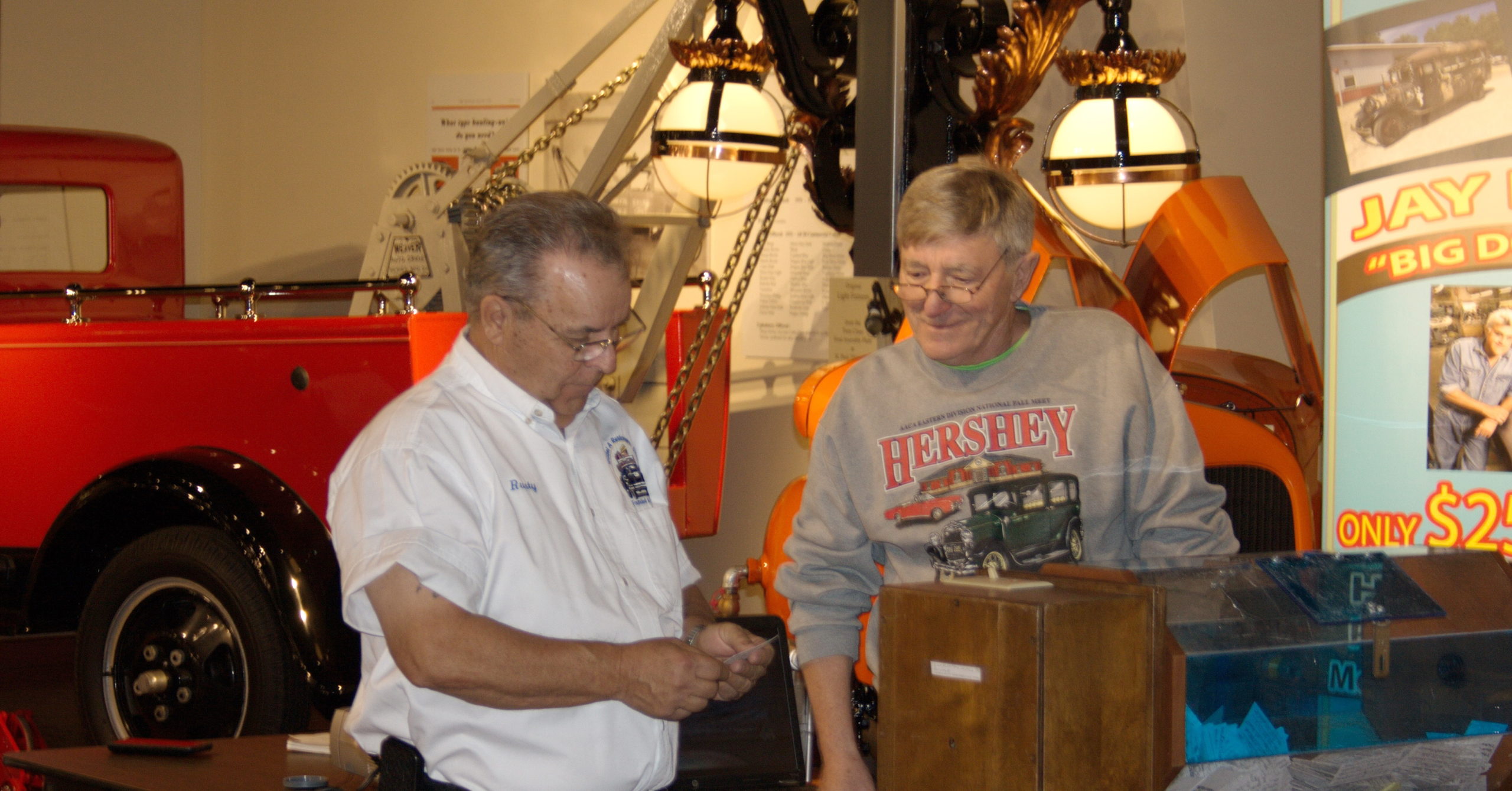 The Big Winner of the Jay Leno raffle is Chris Prondzinski.

Chris won the trip for two to visit the Jay Leno collection in Burbank California. Congratulations!

Ken Ehrenhofer presided over the drawing while Rusty Gould, President of the Model A Restorers Club had the honor of drawing the winning ticket.

Ken had his eye on the bus for over 40 years and when the owner passed on and an auction was held Ken had the opportunity to make the purchase.

The previous owner Lee Roy Hartung of Glenview Illinois was a scrap dealer and a major collector of all things antique. The rear wheels of the bus where frozen and a flat bed was used to get it to it’s new home. Ken and the barn crew got it running and gave rides at the Annual Swap meet at Ken’s home. Ken has donated it to the Model A Ford Foundation to be used for giving rides to visitors to the Gilmore Museum upon completion of the restoration. Currently the bus is undergoing a full restoration and the Coastal Carolina A club will have the Chassis completed before the end of this year. When finished it will be only one of three adult passenger buses built by the Union City Bus company to exist. Follow the restoration as we go along….. 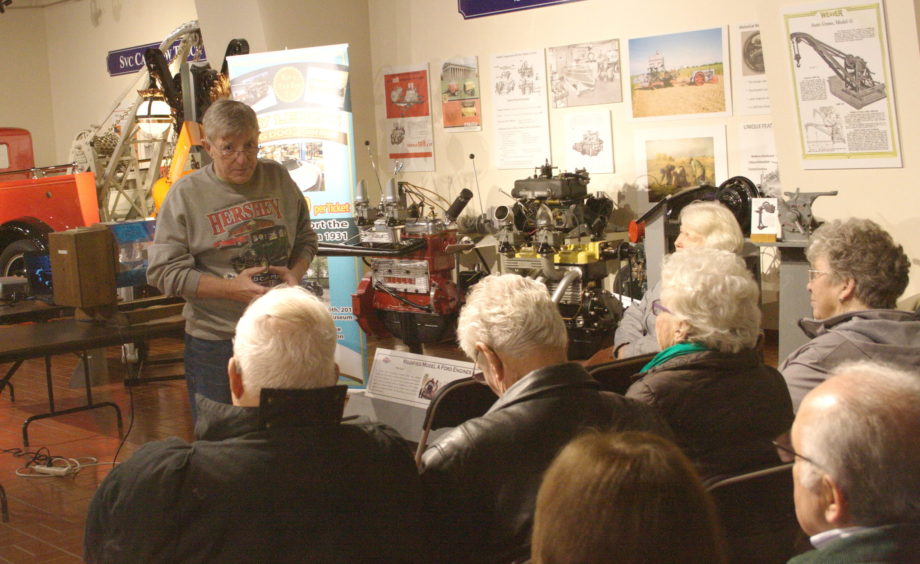 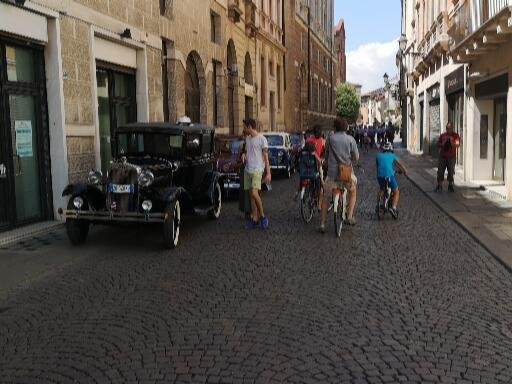 I won a trophy at the car show on Sunday the 23rd June 2019 and thought you might like to look at the pictures. The Ford is registered in the Italian system and I have plates to drive anytime and where ever I choose. Take it out only for special occasions such as pick up the Grand children from school, Club functions and etc. This Ford is causing a lot of commotion here in Vicenza, it’s not uncommon to see an old Ferrari on the streets, but to see this ford is absolutely unbelievable for the Italians. I get thumbs up every where I go and outstanding comments. This is truly a way to share a part of America’s past with The Italian people.

Model A s On Tour

MARC Has Partnered With NAPA

Receive a 10% discount off your purchase. 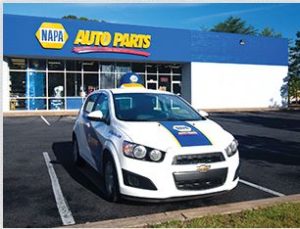 Another Great advantage to being a MARC member!

We are excited to announce MARC has partnered with NAPA to bring you additional savings to help you get and stay on the road with a little extra in your pocket.

To participate in this program, simply download the AITA  (American Independent Truckers Association) app from your App Store, you will be prompted to create an account with your email and a password. Bring your phone with your AITA app to your local NAPA store, be prepared with your MARC membership number.

There are no membership cards for this program.

Restoration of a 1931 Model A Ford Passenger Bus 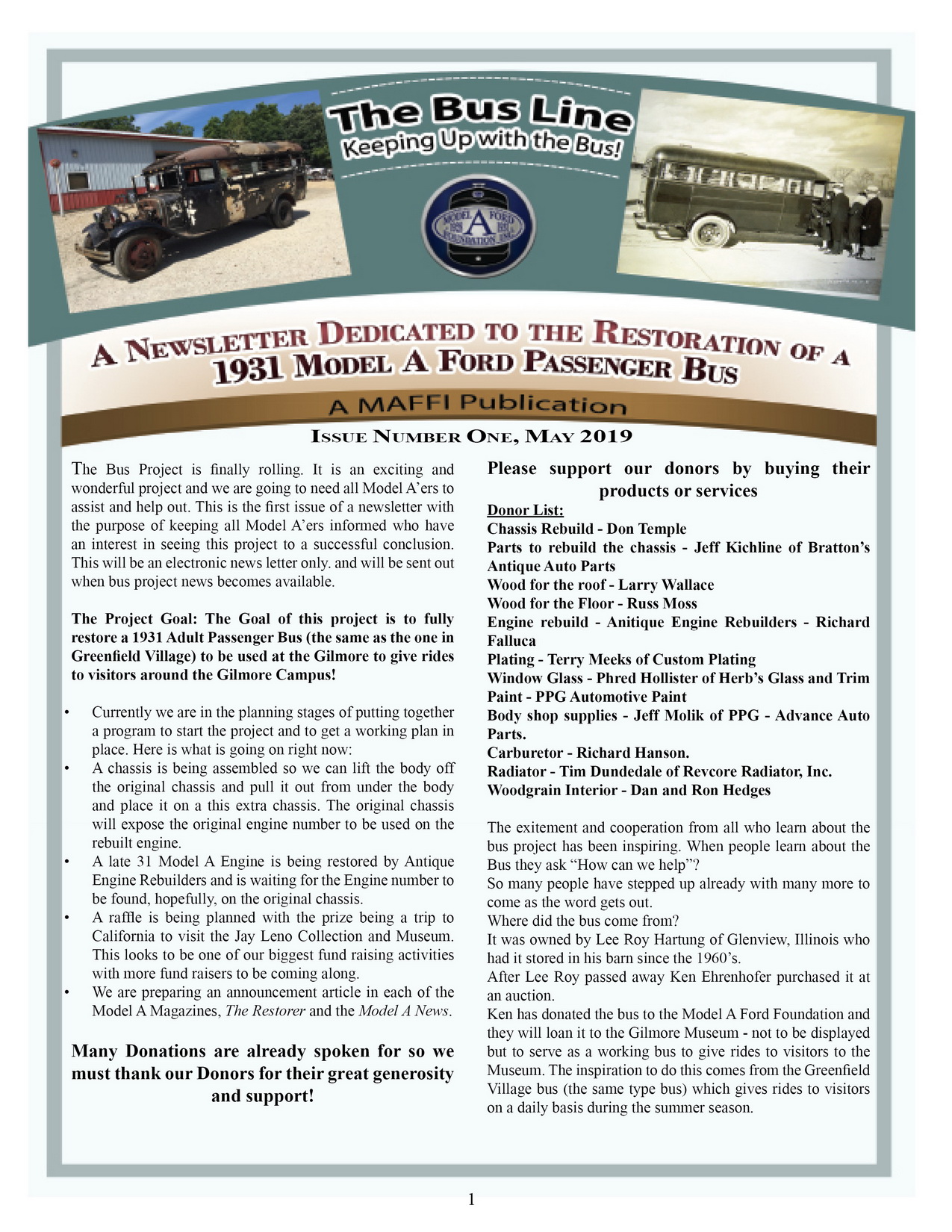 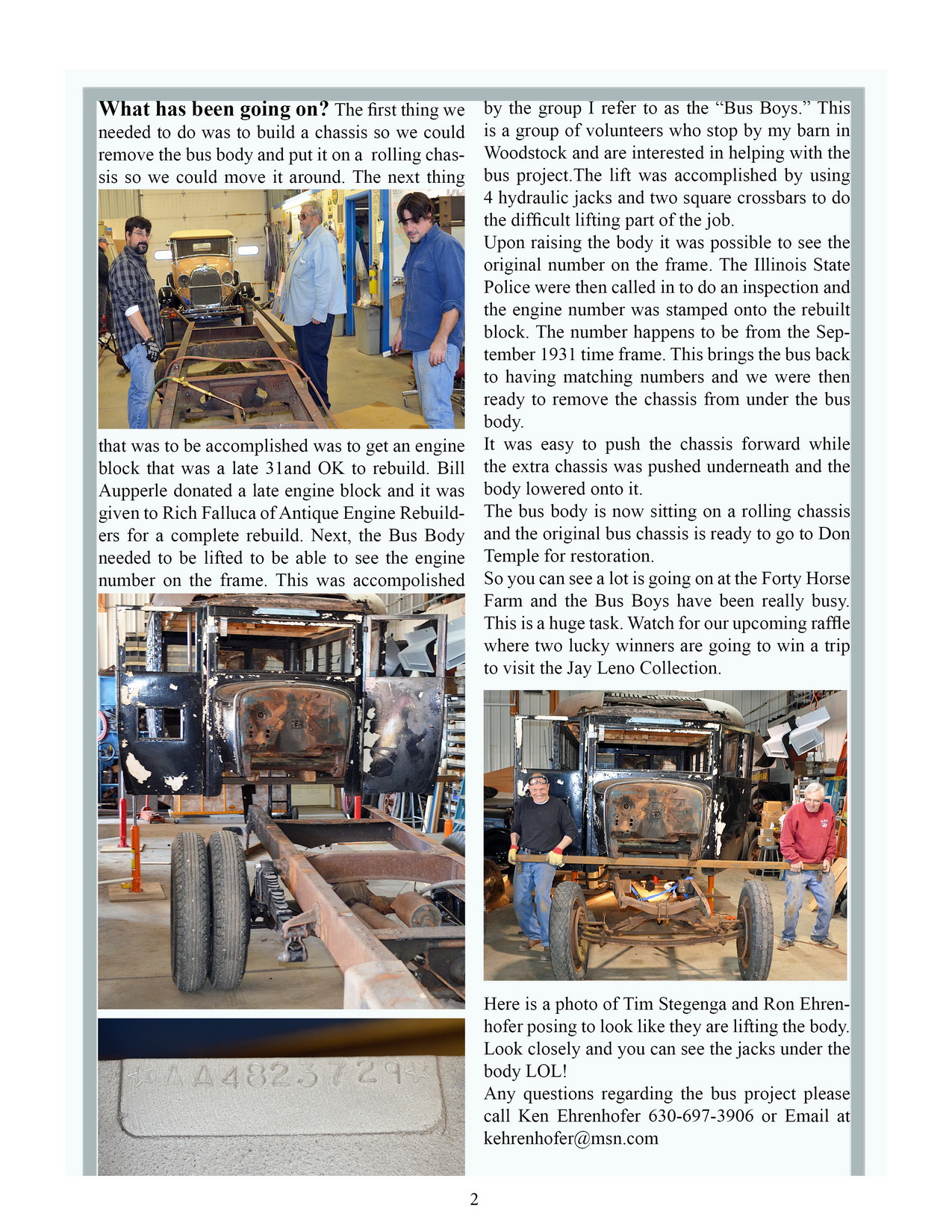 The MATC is Going to South America.

The Model A Touring Club is organizing another overseas tour – this time to South America. We will ship three Model A’s per Sea Container from various US ports to the port of San Vicente, near Concepción, Chile.

Our tentative itinerary includes Machupeland, the Lakes District, Lago Villa Ricca and the Andes mountains. We plan to spend an entire weekend in San Carlos de Bariloche (Argentina) as well as a weekend in or near Concepción (Chile), where we hope to meet with So. American Model A enthusiasts.

Participation is limited, and international logistics require us to start making reservations now!  Don’t delay – if you have any questions, contact Jay or Pat Burbank at pat@patburbank.com or check the MATC website: modelatouring.club. 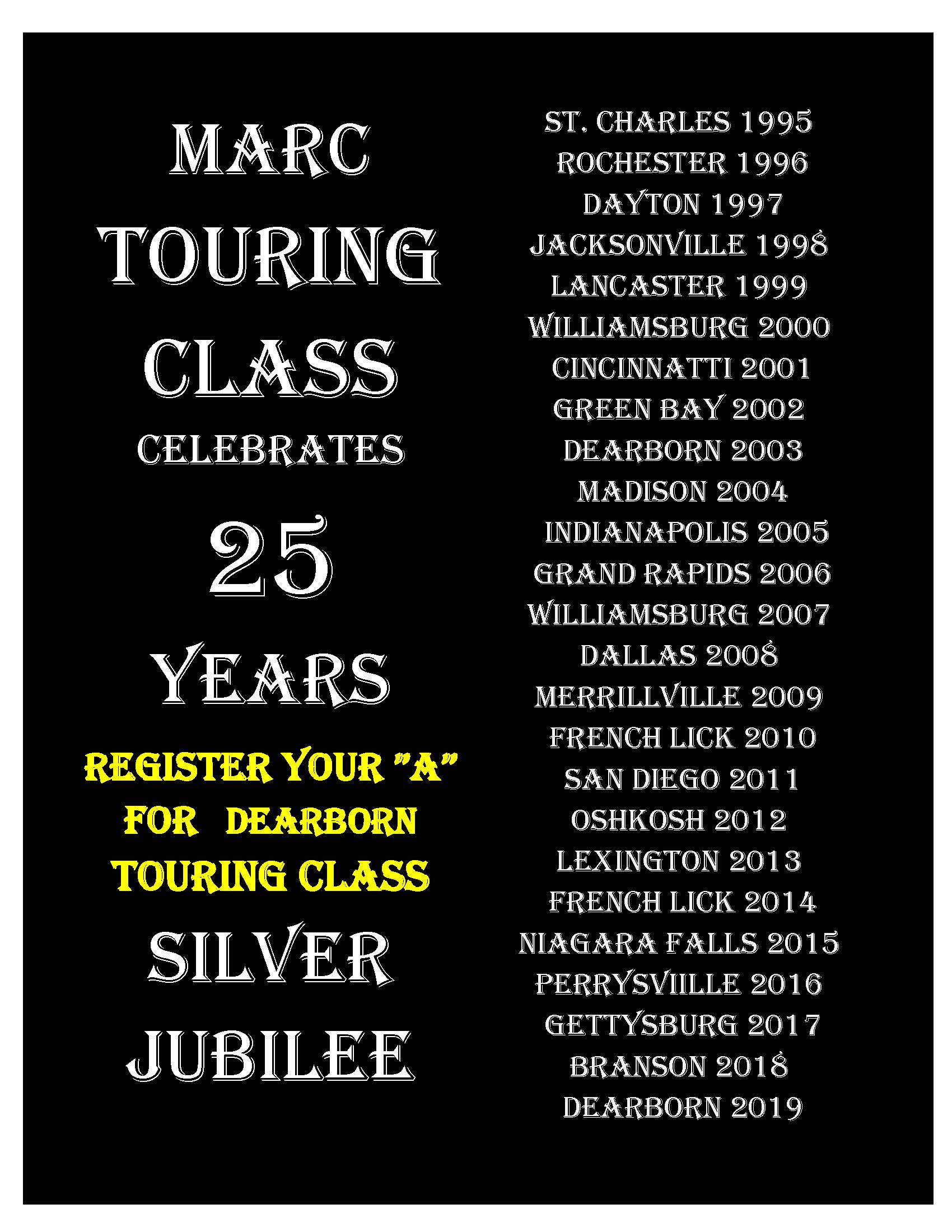 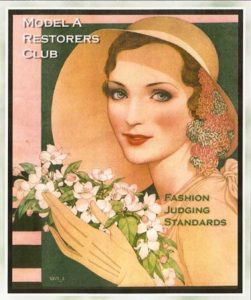 MARC FASHION COMMITTEE:
The MARC Fashion Committee is pleased to announce that we will be piloting a third judging category at the National Meet in Dearborn in August. This category will be a blended category in that the ensemble may incorporate both original and reproduction items for its completion. The criteria for the blended category are as follows:
1. An original major garment must meet the criteria for an original major garment – authentic to the 1928 to 1931 years in style and fabric.

3. Any of the other four categories may be either original or reproduction or any combination of both.

4. Ensembles will be judged for the entire authentic appearance, just like a complete original or reproduction ensemble.

We encourage MARC members to consider entering this new category. And we look forward to seeing new faces and new ensembles in our fashion judging in August. 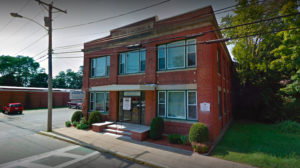 LeBaron Bonney Company, one of the auto industry’s oldest manufacturers of interior soft trim for antique cars, has filed for bankruptcy, according to a court filing.

LeBaron Bonney Company has deactivated its website and most of its social media accounts. What’s more, owner Scott Holbrook’s email address is not functioning.

According to LeBaron Bonney Company’s Chapter 7 court filing, it has assets valued at $500,000 to $1 million, as well as liabilities valued the same.

Chapter 7 is the strictest form of bankruptcy under the Federal Bankruptcy Code. While Chapter 11, 12 and 13 allow for some form of adjustment or restructuring of debts, Chapter 7 mandates that assets be sold to repay debtors.

In most cases, Chapter 7 bankruptcy will close a business for good, as it no longer possesses assets to operate.

Prior to its closing, the company’s website boasted: “Many of our 35 employees have been with the company over 30 years.”

In 1959, Lee purchased a 1930 Model A Deluxe Roadster to restore with his son Barry. While Lee took care of the mechanical repairs, a local auto shop handled the body and paint. However, Lee had a difficult time finding an auto upholstery shop to restore the interior.

When furniture upholsterers at LeBaron Bonney Company suggested they could try duplicating the car’s top and interior trim, Lee agreed. They did such a great job that other Ford owners began asking if his team could upholster their cars.

As demand grew, Lee saw an opportunity to manufacture a line of pre-fabricated interior upholstery kits that hobbyists could install themselves. The company grew from there.

Until recently, LeBaron Bonney Company sold everything from seat covers to carpets in their online store. The store was a go-to destination for auto enthusiasts across the world.

It’s unclear if LeBaron Bonney Company will continue to exist in some form after bankruptcy proceedings are complete. The process can take up to six months.